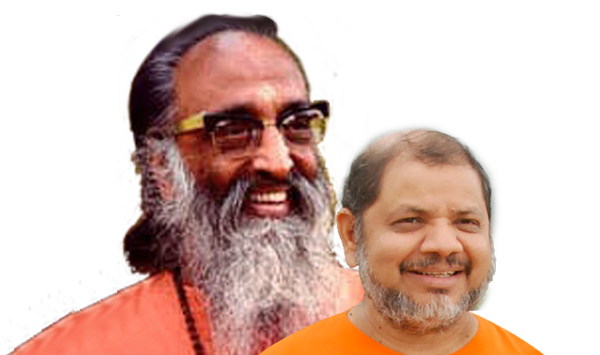 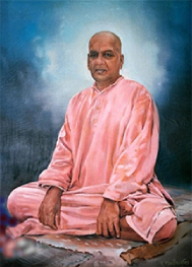 Swami Tapovan-ji Maharaj of Uttarkashi is one of the most renowned spiritual masters of the 20th century, that pristine glacier of Self-knowledge from whom flowed the Ganga of Vedantic wisdom through Swami Chinmayananda, the founder of Chinmaya Mission.

Swami Tapovanam was a saint of the highest order, a consummate Vedantin, strict teacher, a compassionate mentor, and a poet whose every thought throbbed with ecstatic awareness. He was a mahatma and the embodiment of the ideals of sannyasa, endowed with supreme renunciation, profound wisdom, austerity, and compassion. Swami Sivananda called him ‘Himavat Vibhuti,’ meaning “the glory of the Himalayas”; and in the world of sages and ascetics, he is acknowledged as one of the four great enlightened masters of Vedanta who lived in the Himalayas during the time.

Intimate communion with Nature (while he walked peaks and valleys of the Himalayas for countless years), gave Swami Tapovan the boundless spiritual reverence. He revealed Nature’s secrets in his “travelogue” in two Sanskrit masterpieces, “Himagiri Viharam” (Wanderings in the Himalayas) and “Kailasa Yatra”. The masterpiece, without a doubt, is “Ishwara Darshan”, which is his autobiographical “sketch” – it is an absorbing account of a search for the Truth.

Swami Chinmayananda said of his Guru, “He was a God without temple, a Veda "without language”. 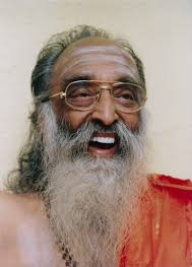 His Holiness Swami Chinmayananda, founder of Chinmaya Mission®, taught spirituality as the art of living. Through jnana yoga (the Vedantic path of spiritual knowledge), he emphasized the balance of head and heart, pointing out selfless work, study, and meditation as the cornerstones of spiritual practice.
Not satisfied by worldly aspirations or his degrees in literature and law, Balakrishna Menon pursued spiritual studies for nine years in the Himalayas, under the guidance of Swami Sivananda (Divine Life Society) and the tutelage of Swami Tapovanam.

He eventually came to share this Vedantic knowledge with the masses, in the form of the dynamic teacher known as Swami Chinmayananda.
Swamiji is renowned worldwide as a spiritual master and one of the foremost teachers of Shrimad Bhagavad Gita.

He is credited with the renaissance of spirituality and cultural values in India, and with the spreading of the ageless wisdom of Advaita Vedanta, as expounded by Adi Shankaracharya, throughout the world.

Swami Chinmayananda attained mahasamadhi in August 1993. His legacy remains in the form of written, audio, and video publications; social service projects; Vedanta teachers whom he taught and inspired; and Chinmaya Mission centers worldwide, serving the spiritual and cultural needs of local communities.

Additional biographical information can be found in “Journey of a Master, Ageless Guru, Swami Chinmayananda: A Life of Inspiration and Service, and At Every Breath, A Teaching”. 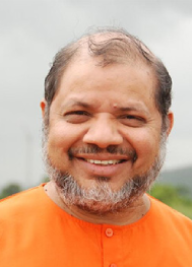 Pujya Guruji Swami Tejomayananda was the head of Chinmaya Mission worldwide is fluent in English, Hindi, Marathi, and Sanskrit. He has written commentaries on many scriptural texts, translated Swami Chinmayananda’s commentaries into Hindi, and authored a number of original works in Sanskrit. Swamiji excels in expounding upon a wide spectrum of Hindu scriptures, fromRamayāna to the Shrīmad Bhagavad Gīta and the Upanishads. As Gurudev did before him, Guruji, as he is known affectionately, travelled the world extensively conducting jnāna yajnas.

Sudhakar Kaitwade (as he was previously called) was born in Madhya Pradesh on 30th June 1950. As a student, he took a keen interest in music and drama. The spiritual call came to him in 1970 when he heard a Gita discourse given by Swami Chinmayananda. He was inspired to join the Vedanta Course at Sandeepany Sadhanalaya in Mumbai.

After graduation in 1975, he served in the field for a few years as Brahmachari Vivek Chaitanya and was initiated into sannyāsa by Pujya Gurudev in 1983.
Swamiji became the head of the Chinmaya Mission upon Swami Chinmayananda’s mahāsamādhi in August 1993. He assumed his new role with ease and humility and is working tirelessly to fulfill the vision of his guru. As he puts it, “I am not in Swamiji’s shoes, I am at his feet.” 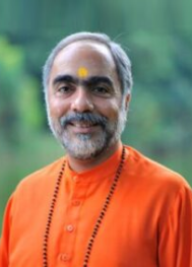 In an era rife with scepticism and confusion about matters spiritual, Pujya Swami Swaroopanandaji is a rare voice that blends authenticity with accessibility; theory with self- practice; logic with heart.

Formerly the Regional Head of Chinmaya Mission Australia, United Kingdom, Middle East, Africa and Far East, and presently Chairman of the Chinmaya Vishwavidyapeeth Trust (University for Sanskrit and Indic Traditions) and Director of the Chinmaya International Residential School in Coimbatore, South India, Swami Swaroopananda has now been bestowed by Swami Tejomayananda the privilege to also serve as the Head of Chinmaya Mission Worldwide.

Born and brought up in the bustling commercial capital of India, Swamiji had always been convinced that beyond life’s superficial, everyday joys and sorrows, there was something more enduring and satisfying. His encounter with Gurudev Swami Chinmayananda ji has completely moved and inspired him.

In 1984 Swami Swaroopanandaji gave up his family’s thriving business in Hong Kong to undergo intensive training under Pujya Gurudev Swami Chinmayanandaji and Pujya Guruji Swami Tejomayanandaji at Sandeepany, Mumbai. He was initiated into the monastic order in 1992. Since then, he has touched thousands of lives across the world, and his tremendous work in bringing out the essential wisdom and underlying unity of all religions has garnered him a place among the vanguards of self-development philosophy. 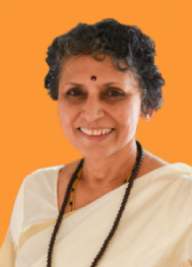 Dr. Shashi Dwarakanath is the Sevak / spiritual guide at Chinmaya Mission Boston. She met Pujya Gurudev Swami Chinmayananda in 1989 and was profoundly moved and inspired by Swamiji’s presence. Having started the Chinmaya Bala Vihar program in her basement in 1989,  she continued to be the Bala Vihar program coordinator at Chinmaya Mission Boston until 2013.

Her interest in Vedanta got the blessings of Swami Tejomayananda and she attended the Sandeepany Sadhanalaya Vedanta Course in Mumbai between 2014-2016. Swami Bodhatmananda was the Acharya of the course. Shashiji took early retirement from her position as the Chief of Pathology and Laboratory Medicine at Lowell General Hospital, MA, in order to continue uninterrupted service to the Mission.

She was awarded the “Life Achievement Award” in 2017 by India New England news. Presently she holds regular satsangs, meditation sessions and other classes. She has conducted several retreats and also offers Hindu services at a local school.She performs Hindu wedding ceremonies.

With her husband Dr. Gopala Dwarakanath and the extraordinary supportive local community, Shashiji has been fortunate to see the growth of the local Mission from its humble beginnings to a vibrant center in the last few decades.